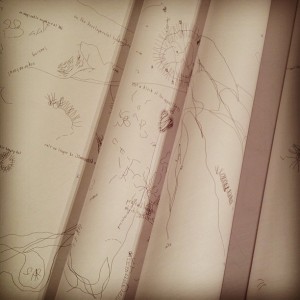 Currently exhibited in the QUT art museum, here is what the wall blurb tells us. “In Drawing Machine, Forster has programmed a computer to draw. The program simulates the human characteristics of drawing, and the result is an endless trail of marks or doodles – but are they drawings, and can a computer draw?”

A similar question has travailed me recently. I’ve been working on the idea of non-human agency in music. Can a suikinkutsu (Japanese sounding water fountain) or an Aeolian harp, for instance, be said to produce music? It’s a question that takes us deep into the heart of new materialist philosophy, but ultimately, I would suggest, into the heart of aesthetics, more than anything else.

It’s in thinking through this, however, that I’ve come to actually question a claim that I’ve made in Noise Matters. Not a good sign I know because we’re not even at the UK and Australian release date of that volume yet…. But still…. These things are perhaps unavoidable. No idea, I think, ever reaches the point at which it is fixed for ever more. If it does it’s perhaps not worth much in the first place. Not an idea at all in a sense. If thought indeed always produces the new at every turn.

So here’s the thing. I had previously claimed that if one wishes to consider the ontology of music, then one should only in fact turn one’s attention to the point at which that music comes into being at the point of expression / the point of composition / performance. Which is to say that whilst the reception of music in the ear of the listener was indeed an important part of the whole picture when it came to thinking about music, this was part of a secondary ontology that did not impact upon the ontology of music per se. But now I’m not so sure.

Let me try and run the argument quickly. If one imagines that music can only actually be produced by a human agent, such that the sounds produced by a suikinkutsu cannot actually be termed “music” because no human agent is responsible for making any kind of choice in relation to the deployment of the sound, only the deployment of the system which autonomously produces sound following the construction of the assemblage, then one needs necessarily to say that, for instance, a piece like Yasunao Tone’s Solo for wounded CD is not music, since similarly the process consists simply of setting up a system which will produce certain kinds of sounds, not making any choices in relation to the sounds that are made, but letting the system run so that the hardware of the assemblage created creates all sounds that are heard, independently of all human agency, even if of course human agency has been responsible for putting the assemblage there in the first place.

The problem with this hypothesis is that it requires the listener to know something about how the system operates, about how sound is produced in order to be able to say that the piece is music or not music. And this is problematic. For it is entirely feasible that one might come across a similar sounding piece that had in fact been created through an intentional act on the part of a human actant. See for instance Inigo Wilkin’s excellent piece “Enemy of Music” on his blog “Irreversible Noise” where he writes:

contemporary musicians working in the non-standard phase space between periodic sine tones and non-periodic complex modulation (such as Haswell and Hecker, Mark Fell and many others) are capable of producing a radically inhuman and non-aesthetic music that mobilizes unpredictable complexity across many orders of magnitude.

Given this, given the possibility of a human-produced  aesthetic expression that would be “radically inhuman” (even if this is an assertion I’d want to push at a little further), I cannot now help but think that in fact the ontology of music has to do with a certain disposition towards sound, either in production or reception, and that in thinking about the ontology of music, one cannot in fact separate out these two different phases for both are implied, arguably, in the term ‘music’. This could of course lead to a whole different philosophical speculation that would pick up on other arguments concerning trees falling in forests with no listener present to hear the sound. To which of course one can only answer “of course it makes a sound”.