In a story that is almost too fitting, once upon a time I promised a piece to someone for an artist’s book on the theme of ‘the copy’. Since reading Houellebecq’s La Carte et le territoire at that time, and knowing of the wikipedia scandals surrounding certain passages in it, whilst being struck myself at the possibilities opened up by thinking through this text in conjunction with the famed Borges fable and Baudrillard’s use of the latter, I decided to do a remix of all of these and produce out of it some kind of a commentary on the idea of the copy. The tale though gets stranger, for 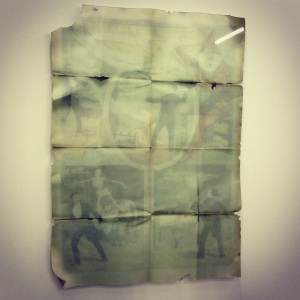 whilst the intention was to see if the juxtaposition could render difficult the possibility of tracing back any one of the original ideas or texts to the point at which it could indeed serve as an origin for any of the other texts folded into my own, the volume in which this was supposed to appear seemed to regress back in on itself, not so much simply never to be published but to appear as though the idea for the text had never even existed in the first place. To this day, I do not in fact know if the text appeared, or if there really ever was or was to be such a text. It could then be that what is to follow broaches copyright laws of some nation state, and if it is so let it be suggested simply that this is but one further mode of reflection on the very question that I was attempting to broach here.

The text to follow is mostly composed of fragments of the following texts:

If once we were able to view the Borges fable in which the cartographers of the Empire draw up a map so detailed that it ends up covering the territory exactly (the decline of the Empire witnesses the fraying of this map, little by little, and its fall into ruins, though some shreds are still discernible in the deserts—the metaphysical beauty of this ruined abstraction testifying to a pride equal to the Empire and rotting like a carcass, returning to the substance of the soil, a bit as the double ends by being confused with the real through aging)—as the most beautiful allegory of simulation, this fable has now come full circle for us, and possesses nothing but the discrete charm of second-order simulacra. In that Empire, the craft of Cartography attained such Perfection that the Map of a Single province covered the space of an entire City, and the Map of the Empire itself an entire Province. In the course of Time, these Extensive maps were found somehow wanting, and so the College of Cartographers evolved a Map of the Empire that was of the same Scale as the Empire and that coincided with it point for point. Let us take some actual territory in which cities appear in the following order: Paris, Dresden, Warsaw, when taken from the West to the East. If we were to build a map of this territory and place Paris between Dresden and Warsaw thus:

we should say that the map was wrong, or that it was an incorrect map, or that the map has a different structure from the territory. Turning his back on photography based on the gelatin silver process, which he had used for all of his work up until this point, he bought a Betterlight 6000-HS which allowed him to capture 48 bit RGB files with a 6000 x 8000 pixel resolution. For the exhibition he had chosen part of the Michelin map of Creuse, the region where his grandmother’s village could be found. He had used a very steep 30° angle to shoot the image and employed as much tilt as possible to create great depth of field. Afterwards he had softened the distant regions of the image and overlaid a bluish effect on the horizon in Photoshop. In the foreground were the lake in Breuil and Châtelus-le-Marcheix. Further back, the roads that wind through the forest between Saint-Goussaud, Laurière and Jabreilles-les-Bordes rose up as though in a dreamscape, magical and inviolable. Towards the top left of the image, seeming to emerge from a bed of mist, one could clearly make out the red and white ribbon of the A20 motorway.

If, speaking roughly, we should try, in our travels, to orient ourselves by such a map, we should find it misleading. It would lead us astray, and we might waste a great deal of unnecessary effort. In some cases, even, a map of wrong structure would bring actual suffering and disaster, as, for instance, in a war, or in the case of an urgent call for a physician. Less attentive to the Study of Cartography, succeeding Generations came to judge a map of such Magnitude cumbersome, and, not without Irrreverence, they abandoned it to the Rigors of sun and Rain. In the western Deserts, tattered Fragments of the Map are still to be found, Sheltering and occasional Beast or beggar; in the whole Nation, no other relic is left of the Discipline of Geography. Today abstraction is no longer that of the map, the double, the mirror, or the concept. Jed Martin’s work was generally thought of as the result of a somewhat cold and detached reflection on the state of the world, an analysis which made of him a kind of descendent of the great conceptual artists of the previous century. Simulation is no longer that of a territory, a referential being, or a substance. It is the generation by models of a real without origin or reality: a hyperreal. The territory no longer precedes the map, nor does it survive it. It is nevertheless the map that precedes the territory—precession of simulacra—that engenders the territory, and if one must return to the fable, today it is the territory whose shreds slowly rot across the extent of the map. The entrance to the gallery was blocked by a large hoarding with a two-metre gap on each side and on which Jed had hung two photos: a satellite image of the area surrounding the Ballon de Guebwiller and an enlargement of the departmental Michelin map of the same region. The contrast was striking: whilst on the satellite image one could only make out a morass of more or less identical greens dotted with vague blue stains, the map traced a fascinating network of local roads, scenic routes, reference points, forests, lakes and passes. Above these two blown-up images was the title of the exhibition in black capital letters: THE MAP IS MORE INTERESTING THAN THE TERRITORY. Two important characteristics of maps should be noticed. A map is not the territory it represents, but, if correct, it has a similar structure to the territory, which accounts for its usefulness. If the map could be ideally correct, it would include, in a reduced scale, the map of the map; the map of the map, of the map; and so on, endlessly…